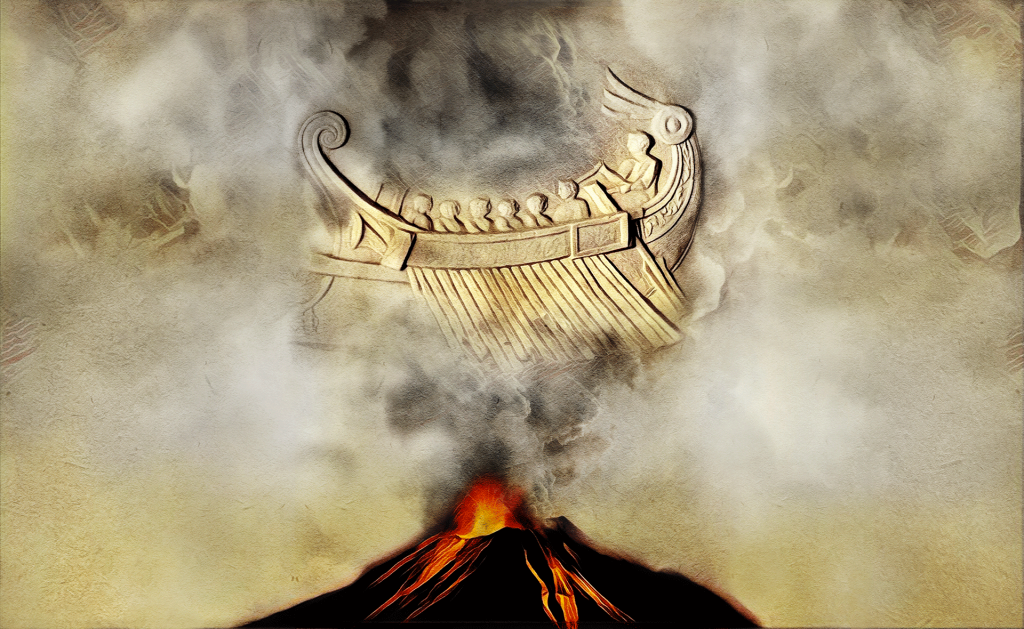 Find out about the Roman fleet’s incredible attempt to save the people of Pompeii.

It is the year 79 AD, Mount Vesuvius began erupting and just a few hours later, the towns of Pompeii and Herculanum would be buried. From his naval base in Miseno, Pliny the Elder, a literary man and admiral of the Roman fleet, watched the phenomenon and decided to send twelve vessels to allow the people of Pompeii to flee by sea.

The exhibition “Pompeii, a forgotten story” reflects on this little-known episode, which is considered today as the first documented case where civilians were rescued by a military force. The use of a naval fleet during this tragic event shows the extent to which Rome had mastered the sea, which allowed them to impose their military, economic and cultural supremacy throughout the whole Mediterranean region.

The tour is organised around a collection of over 250 archaeological objects from Pompeii, Herculanum and other important sites in Campania, on loan especially for the exhibition from some of the great Italian museums. The set design creates a real immersive experience with an array of recreations, different settings and interactive multimedia devices (animated maps, videos, games). Despite the fact that there have been quite a few exhibitions recently based on this sad chapter in history, here the story is told in a very different way, through the eyes of Pliny the Elder who was a direct witness of the tragedy.

Through this exciting exhibition, the new Musée de la Romanité in Nîmes invites visitors to relive the last days of Pompeii, a flamboyant city with a tragic destiny, immortal symbol of the power of Rome.

RELIVE THE LAST HOURS OF POMPEII IN A BRAND-NEW WAY

Come and meet Pliny the Elder… this key figure will accompany visitors throughout the exhibition. The literary man and admiral of the Misenon fleet was on the front line when Vesuvius erupted. In the middle of the night, he decided to leave with twelve vessels to rescue Pompeii. His nephew Pliny the Younger, seventeen years old at the time, witnessed the happenings and wrote down what he saw in two letters to historian Tacitus, which are today considered as the most important source of knowledge from the event.
Then visitors will learn about the naval base in Miseno and the expansion of the Roman military fleet, and the many technological innovations during the everlasting Punic Wars, right up until the victory at the naval battle of Actium, which confirmed the ultimate domination of Rome over the Mediterranean Sea (Mare Nostrum) The story continues with a moment to reflect upon the economic benefits of this naval supremacy: the development of an increasingly rich trade network which supplied other Roman centres just like Pompeii.
Then we learn about everyday life in Pompeii. Thanks to its natural beauty, the fertile region of Pompeii and the Bay of Naples became a hotspot for luxury and the Roman way of life. The town attracted Roman emperors and aristocrats who built beautiful, elegant palaces and villas in the area. Pompeii offers a unique snapshot, an extraordinarily detailed insight into the Roman world, thanks to its preservation after the eruption of Vesuvius. A precious selection of objects found during the excavations is proof of the lavish life in Pompeii, until the fateful day of its ruin.
Then visitors will be plunged (well almost) into the time of the eruption with a detailed description of how it happened: the first signs, falling ashes and stones, right up until the last and lethal pyroclastic flow (fast-moving current of hot gas and volcanic matter) that would cause the death of all the people still in Pompeii at the time. Probably the most moving testimonies of the event are exhibited in the final chapter of the exhibition: the casts of the human bodies that were trapped in their last attempt to survive. Almost 2,000 years later, thanks to this exhibition, visitors can understand how such testimonies came to be, through this unique and very moving experience.