The unique work of Jean-Claude Golvin, architect and archaeologist

Jean-Claude Golvin was born in Sfaw, Tunisia, on 18 December 1942.
Throughout his childhood in Tunisia and Algeria, he was always surrounded by traditional objects and ancient sites. He was brought up by passionate scholars and so it was only natural that he would develop an interest for archaeology.

His education played a significant role in his career. He was able to combine his interest and talent for drawing, architecture and archaeology. These complementary disciplines would serve as the basis for his rather atypical and innovative career.

From 1973 to the 2000s, he had a rich and diversified career in France and also in Tunisia and Egypt. For 11 years, he ran the Franco-Egyptian centre for the study and restoration of the Karnak Temple Complex in Luxor and he also managed the ongoing work carried out in Karnak by the CNRS. In 1992, he was appointed CNRS director of research for the Institut Ausonius (Université de Bordeaux III) and he developed research into the architectural reproduction of ancient monuments.

In 1989, he produced his first watercolour drawing, a reproduction of the Karnak complex in Egypt. A series of watercolours followed, depicting the various phases involved in building the El-Jem amphitheatre in Tunisia, as well as other amphitheatres that were built in Rome, up until the construction of the Colosseum.

Since then, he has devoted his time to graphic reproductions of various sites, covering all periods of history and countries. He regularly takes part in exhibitions, publishes his work and makes contributions to various journals. His reproductions are used as references and they feature in numerous books devoted to history and heritage.

Over a period of more than 30 years, Jean-Claude Golvin has reproduced more than 500 monuments and sites across the world, creating an incalculable number of drawings, sketches and watercolours that have all been celebrated for their scientific accuracy and sheer beauty. 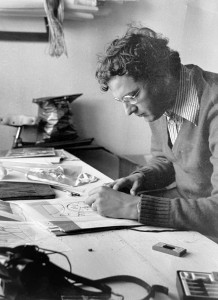 The traveller of ancient times, arriving from Spain, would head towards Nîmes along the Via Domitia. Travelling north, they would catch a glimpse of the city as it appeared in the distance, protected behind its city walls, a symbol of power and prestige.

Thanks to the work done by archaeologists, the topography of the area in and around the ancient city, the boundary of the Roman city, the architecture of the public buildings and the outline of the urban and residential area are all well-documented today. A bird’s eye view reproduction of the Roman city, as well as the sanctuary of the Fountain, the Tour Magne, the Temple of Diana, the forum with the Maison Carrée and the Castellum Aquæ…

As part of his work with the City of Nîmes and the INRAP (French National Institute for Preventive Archaeological Research), Jean-Claude Golvin has devoted a significant amount of his time to representing Nemausus, creating a visual overview of the knowledge of Roman Nîmes. 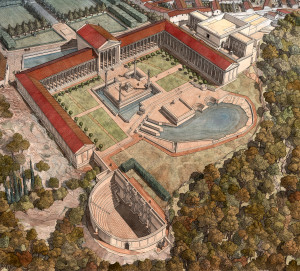 Jean-Claude Golvin and the Roman amphitheatre

The Coliseum in Rome was used as the model for all the amphitheatres built in the cities that had the means of building such a monument. This was the case for Nîmes, Arles and El Jem for example.

The amphitheatre is a key feature of Jean-Claude Golvin’s work. To continue the work he did on amphitheatres for his thesis, his drawings breathe life back into these vast stone monuments, making the complex architecture seem so real, you could almost touch it.

Since 2009, the amphitheatre in Nîmes has been undergoing some significant restoration work. In parallel, the archaeologists from INRAP are also conducting an archaeological study. These studies have brought to light the different construction phases for the monument, they have helped gain an understanding of how the worksite was organised and evidence has been found of the many technical processes that were used.

Along with the archaeologists from INRAP, Jean-Claude Golvin has been able to come up with solid hypotheses for the issues faced by such a construction, both from an architectural point of view and regarding the organisation of the building work.

Across thirteen special displays, he depicts the stages of the construction and what the worksite looked like. 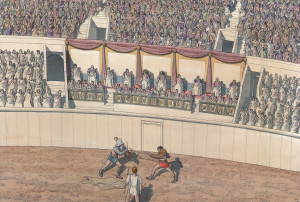 Most of Jean-Claude Golvin’s watercolours have a scientific or educational aspect to them.  In partnership with Ubisoft, Jean-Claude Golvin has entered a whole new realm. His drawings are brought to life and serve as the virtual decor for the well-known video game Assassin’s Creed ®.

Assassins’ Creed ® is a series of action video games that plunges the player into various eras throughout history. To provide users with a credible game, Ubisoft works with historians and archaeologists. For Assassin’s Creed Origins®, that takes place at the time of Pharaoh Ptolemy XIII, Jean-Claude Golvin produced a series of watercolours that reproduced landscapes and places in ancient Egypt.

Through his work with the entertainment industry, Jean-Claude Golvin is making several decades of research work available to a much wider audience. 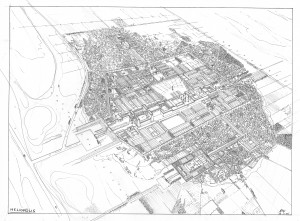