The Jardins de la Fontaine in Nîmes are considered to be among the very first public gardens in Europe. These gardens were built around the original fountain in Nîmes, and were then transformed over the centuries. Today, they add to the splendour of some of the town’s great monuments such as Tour Magne and the Temple of Diana. If you’re passing through Nîmes, don’t miss this historic place.

The entrance to the Augusteum was marked with a propylaea, and the last remains of this are today exhibited in the atrium of the Musée de la Romanité. There is evidence of the imperial cult here, but a monumental altar which was most likely devoted to Rome and Augustus stood in the middle of the nymph’s pool.

The Temple of Diana

The ruins of the Temple of Diana can still be seen in the gardens today, and along with the source, the nymph and Tour Magne, are evidence that the ancient sanctuary was once here. The function of the Temple of Diana remains a mystery, but it was most likely used for worship or cultural purposes, related to the imperial cult. The arch, niches and sculpted chambers can still be seen today.

The Jardins de la Fontaine, the green lung of Nîmes

The Jardins de la Fontaine are among the first public gardens in Europe. The 15-hectares of greenery are particularly charming and this is a peaceful place in the centre of Nîmes. The lower section is a pleasant place for a leisurely stroll, along the canals, pools lined with balusters, statues and benches in the shade of the scented linden trees. In the upper section of the garden, landscaped footpaths lead to the Tour Magne, winding around plantations with Mediterranean plants, rockeries and dotted with great views overlooking the town.

The Jardins de la Fontaine bear the ‘Remarkable Garden’ label and have been developed in a particularly elegant way, to showcase the antique origins. 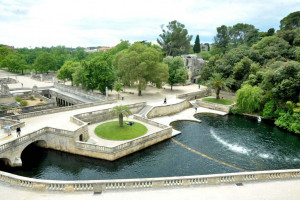