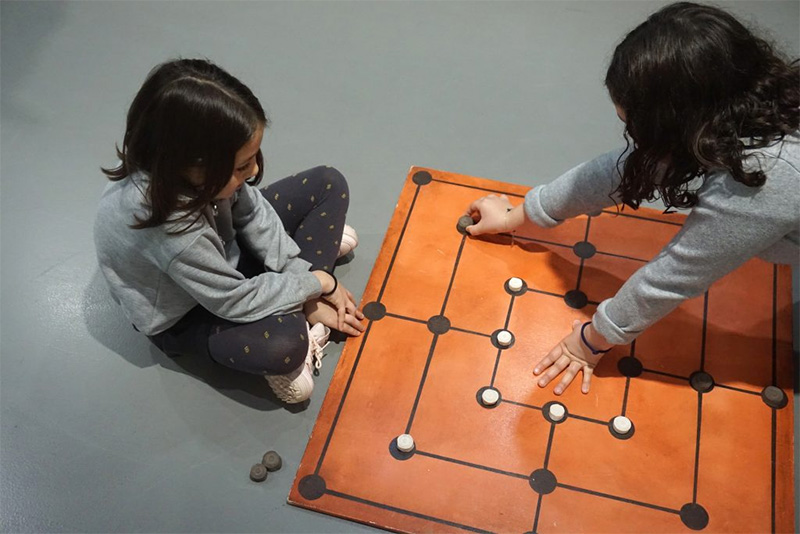 Take your tour of the museum and its collections even further with this wide range of activities, to enjoy at home.

The Musée de la Romanité has a wide range of activities for you to do at home, as a family. Games, sewing, drawing, recipes, etc. to discover the museum and its collections, and learn all about archaeology in general.

The Romans loved to decorate the floors in the best rooms of their dwellings with mosaic pavement. This is the result of a decorative art, using pieces of materials (marble, stone, glass, ceramic, etc.) that are assembled to make a pattern.

The floor is prepared in several stages. The chosen materials for the decoration are cut into tiny cubes, known as tessera. They are then placed into a bed of mortar before it dries, according to the chosen pattern. The pavements can be block colours or patterned with geometric shapes, plants or figures. Each stone has its own colour, they don’t need to be painted.

Do you think you can recreate the mosaic known as the “Enclos du gouverneur” (governor’s chamber), that is on display at the museum? There are several levels of difficulty you’ll need to go through, to be able to observe the many details of this remarkable piece, once used by the industrial manufacturer owners of the “enclos”, as the tiling for their shop. A part has now disappeared and the rest was donated to the Town council in 1825.

In Roman times, people of all ages would play games and activities that were available to people from all walks of life. Evidence of this has been discovered through archaeology, but there are very few written sources providing the game rules. Numerous objects and game boards (portable ones or engraved directly into the ground in public places) have been found. Iconography has also provided us with a great number of portrayals of children or adults playing games. Nuts, dice and small bones provided so many possibilities for games that were more or less complex. Table games (pieces, chips, pucks), strategy games (ludus latrunculorum) and games with dice were the most popular ones. Monetary bets were often made.

The original Roman diet was rustic. A basic diet was made up of cereals, pulses, dairy products and bread. Breakfast (jentaculum) and lunch (prandium) were frugal meals and often just a quick bite. The main meal of the day was dinner (cena) which would take place around a table.
Influence from the Greek civilisation would bring about changes to these practices. Foods from all over the Empire would also later be added to these meals (spices, condiments), leading to much more elaborate culinary practices. Most of the population had a very simple diet, but the wealthy enjoyed holding banquets where extremely varied, lavish and sometimes extravagant delicacies were served.

Ceramography is the study of terracotta objects that are found in great quantity during archaeological excavation work. This is the material that is most often found on sites, and there are several reasons for this abundance: the raw material used to make these ceramic objects was easy to find and use.

These objects (breakables) were also regularly changed. Furthermore, ceramic could not be recycled (unlike glass or metal). Finally, terracotta can tolerate the conditions of being buried and is well conserved (unlike perishable materials, metal and glass). This material allows sites to be dated and we have been able to understand the technical expertise of the time (manufacturing/baking), learn about exchange networks, trade routes, and contact between different civilisations.

Finally, this material has allowed us to build a picture of everyday life: the uses, culinary, cultural, funerary practices, social status, etc.

Paleoethnobotany is an archaeological speciality made up of several disciplines working to understand the paleoenvironment and/or ancient lifestyles.

Among these disciplines is carpology, which is the study of seeds and fragments of plants that can be found in archaeological strata. This helps to understand the plant environment at a site, farming and culinary practices of the past, and to determine which local or imported species were found there.

Another discipline is anthracology, the study of charcoal (plant species that have been carbonised and so preserved from decay). This practice has helped to learn about tree species that were once found in a given place at a given time in history, and to understand how the wood was used in everyday life or in craftsmanship.

Finally, the last rather unknown discipline is palynology, which is the study of fossilised pollen and spores, found in archaeological strata. This discipline allows the evolution of plant species to be charted over a very long period, and the impact of climatic variations and human intervention in the natural environment to be measured.

Textile production has existed since protohistory (the last prehistoric period). This highly specialised activity was carried out both in people’s homes and on a larger scale. It contributed to the economy: raw material production, manufacturing and then selling the end product.

There is little evidence left of this because the materials used were mostly perishable. These materials could only be conserved in very specific conditions (dry, arid climate, or on the contrary, humid/flooded/aquatic environments).

During excavation work, the majority of objects found were ceramic, including spindles which showed evidence of spinning plant or animal fibres. The counterweights (ballast system) are proof that looms existed at that time. These objects can be recreated with the looms used today by craftspeople who have chosen to carry on using ancient techniques. The needles (made from bone or metal) are evidence of garment manufacturing.

The cost of fabric would depend on the manufacture time, materials and complexity of the pattern. It was also worn as a sign of social success. People with a high social status would wear loose clothing made from long pieces of fabric.

This fabric was dyed using natural dyes from plants (madder, saffron, indigo, etc.). The colour white did not exist (because we know from written accounts that the fabric was dyed with chalk to obtain this colour). Wall frescoes are essential in learning about the colours worn in clothing at the time.